Now you can update the elevations of survey points, moving them to any existing surface.

What a great way to create additional points for stakeout, like in the video shown here.

We added a help topic just for surface elevations. Now there’s one place you can find help on

We want to provide more GPS/GNSS tools in TPC and support for geoids fits right in.

TPC considers the geoid model selected to be part of the Coordinate Reference System (CRS). So everything that is involved in converting between coordinates and geodetic positions happens in one place, the CRS. 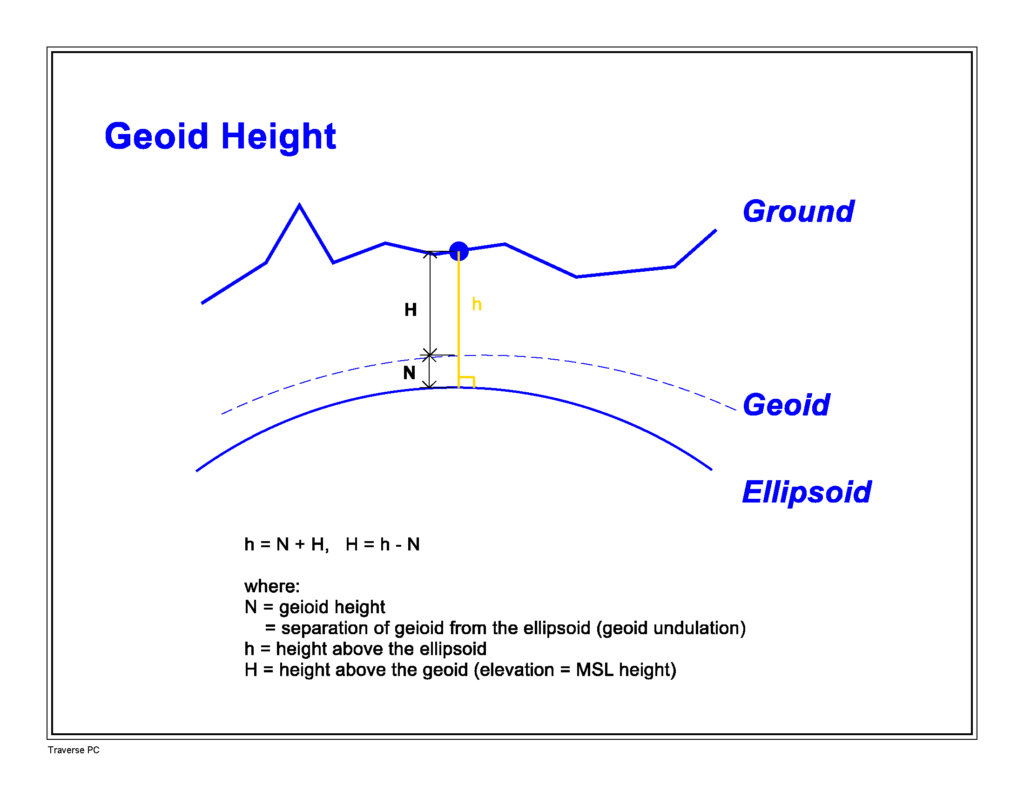 By default, TPC selects a geoid model called None, and no geoid computations are performed. For small surveys, a simple translation of ellipsoid heights to elevation works great, but there are lots of reasons for needed a geoid model.

As soon as you select a geoid, coordinate elevations get computed automatically from geodetic ellipsoid heights and visa versa.

You can even change geoids and watch TPC compute slightly difference elevations and ellipsoid heights as you do.

When you select a geoid, you can also choose to cache the geoid model over the geodetic extents of your survey. This allows TPC to read the geoid file one time, then do as many geoid computations as you need without accessing it again. 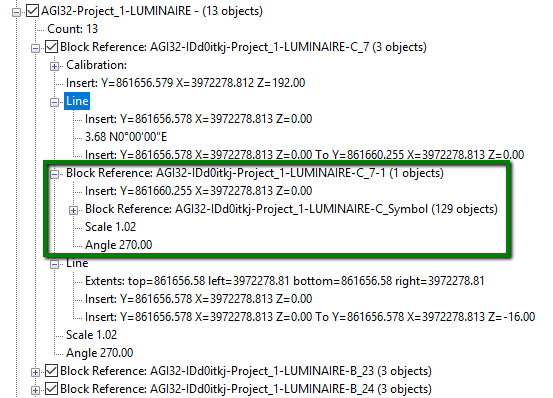 Older versions of TPC didn’t always handle these properly when you inserted and XReference or duplicated a drawing.  On rare occasions, it would mix up the blocks, displaying the wrong block in the wrong place.

Now TPC properly handles the nested block IDs and keeps everything straight for you.

TPC now allows block references to place their member objects on their own layer, if specified.

So what does this do for you?

Here is another luminaire block reference, this one with two fixtures, two arms and one center pole.

This image shows both the luminaire and pole layers turned on. 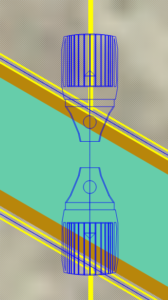 This image shows the luminaire layer turned off, but the pole layer is still turned on. 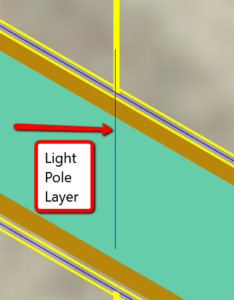 Now you can easily drill down to the light pole layer and convert the poles to survey for stakeout.

More and more of you are using XRefs to bring CAD data into your survey drawings. This is actually our preferred way now for the surveys we do.  But several issues sometimes interrupted what was an otherwise smooth workflow, so we’ve addressed them here in this release.

Read through the Individual Block Reference Layers in the previous tab. This affected XRefs also.

So now, when you insert an XRef, TPC pretty much creates the exact same XRef layers in your drawing that the XRef has in CAD. This makes it much easier to drill down to just what you want on just the layer you expect it on.

But this can create some pretty long names. 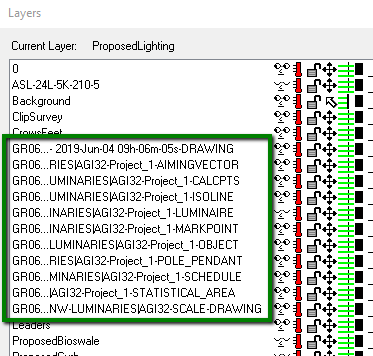 So we took the liberty of truncating the XRef name, as needed, in the Layers Dialog and Layers Pulldown, making them easier to read.

It’s a pretty minor change, unless you are working a lot with XRefs and get tired of figuring out which layer is which.

Prior to this release, TPC stored all blocks used by an XRef in the drawings list of blocks, even if the XRef was not bound.

So as you can imaging, the TRV files sometimes got pretty large and didn’t load as quickly.

Now the XRef is entirely responsible to manage it’s own blocks as it reloads itself into a drawing. Just the way it should be.

We hope you are enjoying the calibration tools we added to TPC Desktop 2019 R0.

Calibrations provide a quick and solid way to relate any coordinate systems to your survey, like with the CAD file used in this video.

Our TPC users have been pretty busy running them through the works and have offered a few suggestions for improved workflows. 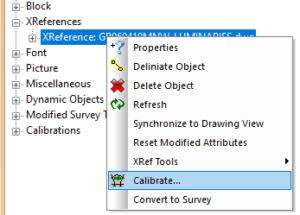 So you’ve inserted an uncalibrated XRef and it doesn’t show up in your drawing.

We couldn’t help but add this one because it can save you so much time and hassle. We think using calibrations should be one of the WOWS! in your day and this tool pretty much guarantees it.

And you’re not limited to XReferences. Just expand the layers, right-click any object and TPC will tell you if it can be calibrated.

The Calibrations node in the Drawing Data Manager (DDM) is now more selective, as it should be.

It shows just those calibrations that

If you calibrate a photo, and don’t save the calibration, the Calibrations node will not include that calibration. It is considered an ad-hoc calibration and can only be undone via the Drawing View’s Undo command. 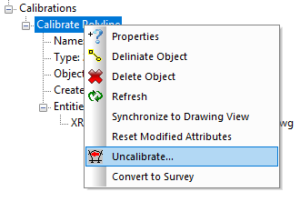 In the example shown here, we inserted an XRef and calibrated it. So now we could right-click the XRef in the drawing and uncalibrate it, or we can right click the Calibrate Polyline shown here under the Calibrations node and choose Uncalibrate.

Once again, you could import the file then Calibrate the Last Import, that that takes extra steps. Instead, we’ve made it easy to calibrate when you import, so the CAD objects show up right where you expect them.

And TPC automatically handles the new association between the CAD file and the calibration you select.

In the dialog shown here, we imported a CAD file that was not yet associated with the calibration we selected. So TPC asks if we want to associate it now.

Choose Yes, and the next time you import that CAD file into that survey (like in a new drawing), TPC will automatically select the correct calibration for you to use. 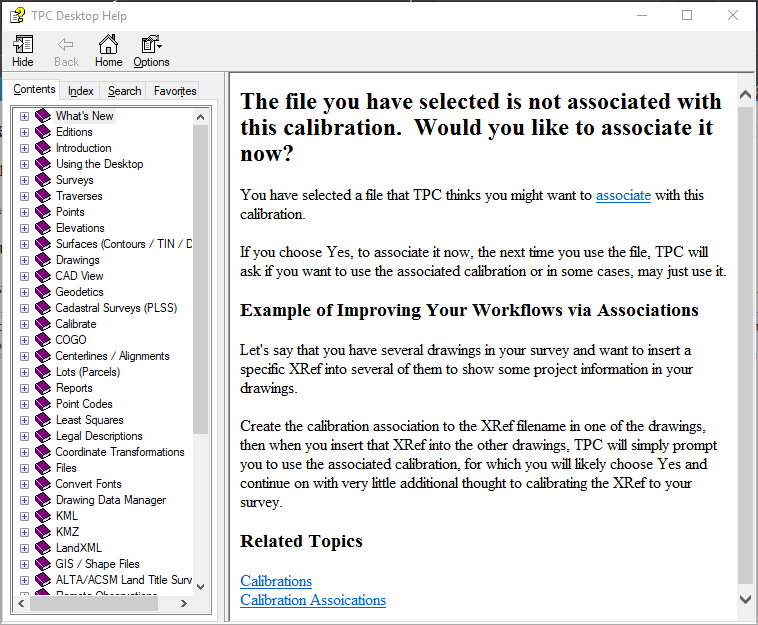 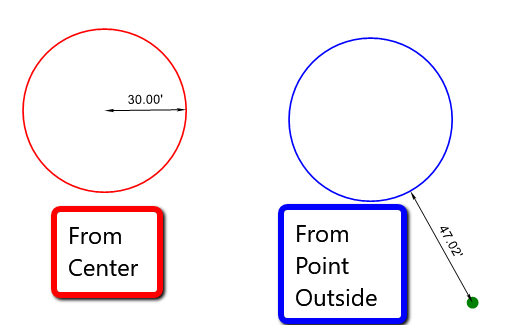 We added two options for using circles with dynamic offsets. You can now use either the Nearest or Perpendicular snap options to create the two dynamic offsets shown here.

Some of our users have asked for the first option so they can show scale on an inserted vicinity diagrams in a drawing. And while we were at it, we added the second one so you can show distances to the edge (circumference) of any circular object.

In both cases, you can move the circle and the circumference end points update automatically.

We’ve been working hard to improve the usability of GIS with TPC.  Little things can make all the difference, and we’ve been looking into them.

When TPC exports survey data as point and polyline shapes, it also writes basic information about the points and traverses.

GIS applications can decide to use this information or ignore it.

And we’ll be adding additional information for imported traverse and point shapes as we go.

By definition, shapes include their extents. So we’ve expanded TPC’s geographic coordinate support to export these extents as geographic extents when you choose to export a geographic shape file. If your GIS application uses shape extents, you’ll be happier with the results.

Undo/Redo is Now Available for Polyline

Any cookies that may not be particularly necessary for the website to function and is used specifically to collect user personal data via analytics, ads, other embedded contents are termed as non-necessary cookies. It is mandatory to procure user consent prior to running these cookies on your website.