Converts the selected entities to survey space. If you have multiple objects selected you’ll be asked if you want to create a traverse for each object.

The CAD View layer dialog now allows you to isolate a layer. The CAD drawing will automatically update to display only the isolated layer, until the layer is restored.

Select then right click any entity in the CAD View and choose Properties to display a dialog for that entity.  Edit the line type, pen width, color, layer, etc.. For text entities , you can even edit the text. It all works pretty much just like it does in the Drawing view.

The Edit Codes button gives you access to all the DXF codes.

Remember, in the CAD view, you are editing the native CAD file itself. So you can make changes and send it right back to the client.

TPC’s CAD View let’s you see any Layouts stored with the file. But layouts come with some rules. Things you can and can’t do because they are CAD layouts. We cover these rules now in the help topics.

We’ve made two changes to the way TPC exports a surface to CAD.

If you view the surface in CAD using the perspective tools, you can use either the polyfacemesh or the contours. They both look great. 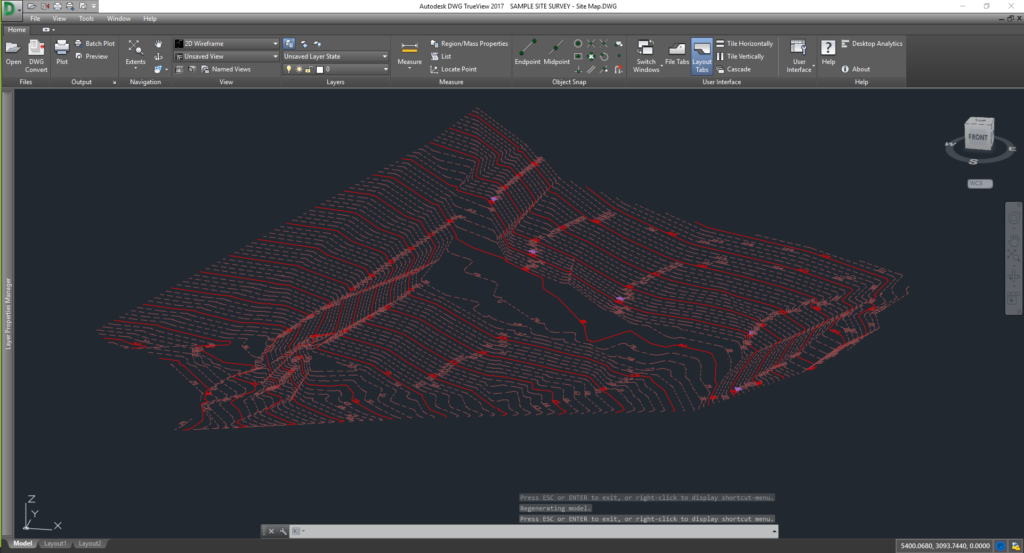 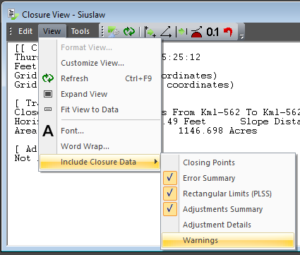 The Closure View now includes a [Warnings] section you can turn on or off like you to the other sub-sections in the view. Just select View, Include Closure Data.

The Closure View does a better job now of refreshing only when it has to. So as you switch back and forth, from the Closure View to other views, the view and the cursor stay where you left them (it used to scroll the entire view and put the cursor back up at the top).

TPC now provides an optional way to look at your control point chain. 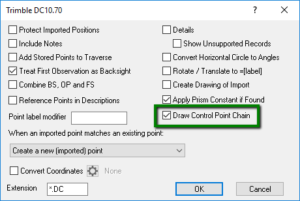 Turn on the option in the Import Settings dialog or you can also turn it on in the Traverse View, using Tools | Draw Control Point Chain.

TPC checks each control point, comparing the preceding control point with any BS records that follow. If they don’t reference the same point, TPC inserts a GAP before the control point, eliminating that control line from the drawing.

But this new option also turns on a new feature that tells TPC to draw any BS records using the Control Point Settings. So TPC removes the control lines you don’t want and adds the ones you do want. 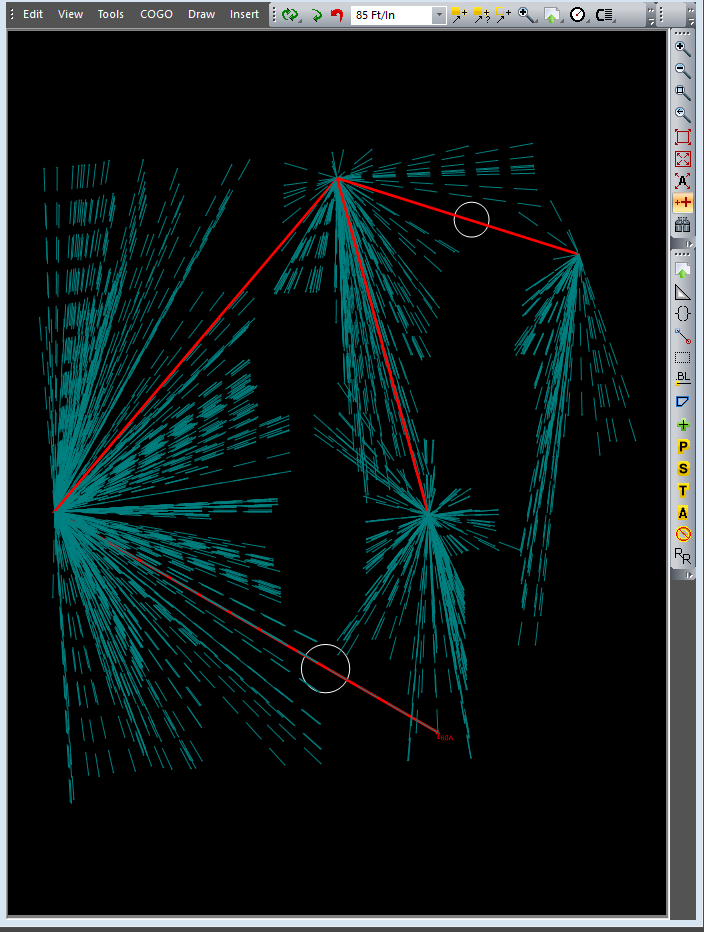 Here’s a picture of the new backsight lines you get (circled).

When you import GIS objects into a drawing, TPC now adds them to the drawing’s current layer. Just select the layer you want as the current layer for the drawing, then import your GIS file. 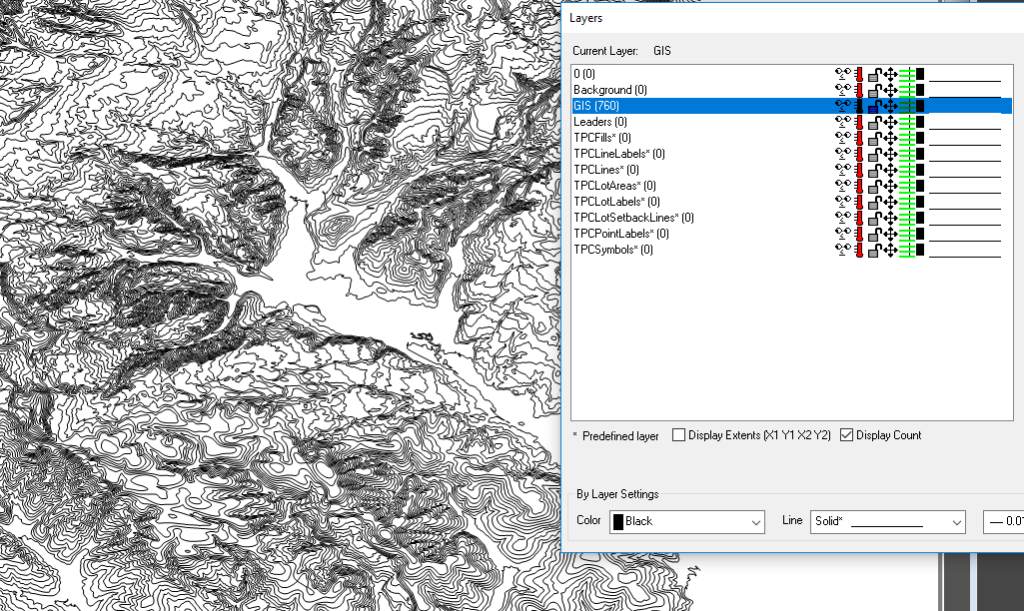 We have had several user requests for a few new point symbols so we have added them.

We now include over 130 point symbols with TPC.

When you add a drawing template to an existing drawing, TPC used to remove any survey space objects from a layer in the current drawing if the template included that layer. So you had to create the drawing based on that template first, then add your survey objects.

Now, you can tell TPC whether or not to remove the existing survey objects when you import the template. You decide if you want to keep what’s already there or not.

Tired of seeing the Move Not Allowed when you accidentally bump a traverse object like a line or a point symbol? Well, now you can go to the Program Settings and turn that message off.

We’ve added two Syntax Definition buttons to let you view how to edit symbol and line types. Clicking those buttons will open the default text editor with the syntax definition file for either editing symbols or editing line types.

We added the Repeat option to more of your favorite drawing commands.

Want to insert multiple leaders? Just start the command and press R for Repeat. Save goes for circles, dynamic offsets and most of the other drawing commands.

Some dialogs, like the Legend Properties, didn’t let you enter decimal sizes using the keyboard. Now they do.

When you right click a text object in a drawing and choose Properties, TPC now puts the cursor in the Text box where you edit the text.

You can now enter decimal line space factors. Add more line spacing to make the table easier to read or squeeze the lines together to fit more lines in.

In the example shown here, we’ve used a factor of 1.0 for the curve table and 0.3 for the line table.

This lets you include your BS records in a drawing which can give you a better idea of how you ran your control and which control points you used in your site or topo survey. 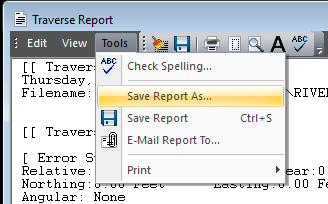 Traverse Report: Save As

Traverse Report: Save Report As… command (1:41)

Temporary Traverse Reports can now be saved as new reports.

Traverse reports have always been temporary. You generate the report, print it out or append it to the current Report View, but when you close the temporary report, that report is gone.

Well now you can choose Save As… or Save.., give the report a file name and save a copy of it. Edit the report as often as you like and choose Save… to update it’s file. After you close the Traverse Report, you can open the report you saved in the Report View and continue working on it.

We added the Relabel Points command to the Traverse View context menu so you can access it like you do in the Points Manager.

Set Elevations to Zero on Import

Some of you import coordinates from systems that use very large negative or positive values for missing elevations. A new option in the Import settings tells TPC to look for these extreme values and set them to zero. Limits in Program Settings will let you define the values that will be considered extreme.

Ready to update your copy of TPC? Check for Special Offers!

This release is available only to TPC Connection members.

Traverse PC allows all Recent Versions (currently TPC Desktop 2015/2016) to be updated to the Current Version of Traverse PC at substantial discounts.

If you own an Older Version of TPC Desktop (currently V1.0 to TPC Desktop 2014), you can update your Edition to the Current Version of Traverse PC for half of its new copy list price.

Updates require the Serial Number of your current program. It can be found by choosing Help | About TPC Desktop.

Traverse PC allows you to Upgrade from one Edition of the Current Version to another Edition.

You pay just the difference in list price between the two Editions.

Upgrades require the Serial Number of your current program. It can be found by choosing Help | About TPC Desktop.